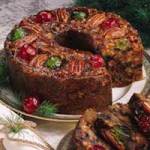 Most menu items not to be served at Thanksgiving would be wrapped, labeled, and deposited in the freezer or pie safe, delicious desserts like presents waiting to be opened.

My grandfather Da was an essential helper in the preparation of one ingredient. He brought a large, for-real coconut into the middle of the living room and presented it for inspection to us kids. We passed it around, each one hefting and guessing how heavy it was. Placing it on the floor in the middle of a spread newspaper, “Stay back,” he warned before whacking the coconut with a hammer.

Often it took several smaller whacks before he could pry the outer shell away. His pocket knife then became a chisel as Da drilled a hole into one end, then drained the coconut milk into one of Mimi’s measuring cups. Soon he was sawing off little chunks of fresh coconut for us to snack on before we started on other pre-baking assignments. The rest would be grated for at least two large pies and one multi-layer cake.

A navy blue and white roasting pan sat on the floor in the living room, overflowing with pecans picked up in a neighbor’s orchard. A smaller pan full of store-bought walnuts sat nearby, and in between us volunteer laborers, paper sacks waited for the empty shells. Hinged metal nutcrackers and clean mixing bowls were distributed to the crew and a-cracking we went.

Of course, you can’t crack pecans and walnuts and not sample the goods. You have to be sure the nuts are fresh and tasty, don’t you? But there were always extras, and Mimi didn’t care if we snacked a little on pecans — our appetites were soon satisfied and set into competing to see who had the most “whole” pecan halves. The pecans that weren’t would get chopped up for the fruit cake, of course, but we needed a lot of “whole” halves for pecan pies.

Once the nuts were finished, it was time for egg gathering. Mimi’s chicken yard was a large wire-fenced oblong with the chicken house at the very back of that space. In between the front gate and the chicken house were several dozen red and white hens and one ornery rooster. Sometimes that rooster took a cockeyed look at me and just knew I was his mortal enemy. Those days I did not enjoy getting selected to collect the eggs. I had to go armed with a broom or a tobacco stick to fend off beak and claw while I made my way through hens who clucked around my feet, thinking I was bringing them some fresh chicken feed.

Keeping an eye out for the rooster, I’d edge my way into the chicken house, perhaps shoo away a hen or two, then carefully place the eggs into a small basket. The reverse course wasn’t much more fun either and all the time I was having to watch where I stepped — you know how neat chickens are, I’m sure.

While Mimi created the batter for the fruit cake, I helped mix the fruit and nuts. Red and green candied cherries, watermelon rind, currants, chopped pecans and walnuts went into a clean foot-tub, stirred with a heavy metal spoon. I’m sure I’m forgetting some ingredients, but I’ll never forget how tired my arm got in the mixing process. Mimi used a pound cake recipe for the base cake, real butter and sugar. Lots of eggs. Almond, lemon and vanilla flavorings went into the batter. Then it was time to add a whole jar of Damson plum jam for color, extra moisture and flavor.

Combining the cake batter and the fruit mix was no easy task, considering how much of each one there was. It took two five-pound tube pans and one two-pound loaf pan to contain the batter, and then several hours to bake. Once the fruit cakes were done and cooled, Mimi wrapped one up in tin foil and set it on the sideboard. That one we’d eat at Thanksgiving. The other she wrapped in wine-soaked cheesecloth and stored in her pie safe, to be “basted” in wine another time or two before Christmas.

When my children were small, for several years I tried to duplicate Mimi’s efforts. I baked two of each kind of pie and cake, one fresh for Thanksgiving, one stored away for Christmas. It was much simpler, since I didn’t have to crack a coconut, pecan or walnut, and didn’t have to maneuver through a messy chicken yard avoiding clucking hens and ornery rooster.